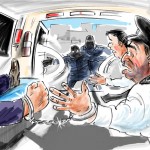 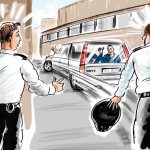 Rick skills go beyond just caricatures: he also produces cartoons and illustrations for various projects, including for PowerPoint presentations, storyboards and visuals for advertising, backdrops for trade and exhibition stands, gags for magazines and promotional material…even comic strips to illustrate news items.

He was the gag cartoonist for Sport First newspaper for two years with ‘Rick’s Sporting View’, and has been the cartoonist for Quest magazine since 1999. He had caricatures commissioned by ‘This Morning’ show for the last series of ' I’m a Celebrity Get Me Out of Here,’ and has been producing comic strip art for a Talk Sport radio advertising campaign. His work regularly appears in ITN and Channel 4 News items. He recently appeared as a guest on the Alan Titchmarsh show.

Rick has recently illustrated a book which he has produced in collaboration with Dr. Sue Whiting, 'How to have a magic memory', soon to be followed by other books in the series - along with a dedicated website @memorysue

View our gallery of cartoons by clicking the image below:

You can visit the full gallery here for more examples of Rick’s work.

Dear Rick, I'm the reporter on the Ashley Cole story. Thank you so much for your fantastic cartoons.